Leuven is perhaps best known to the general public as the birth place of Stella Artois. Among chipmakers the Belgian city’s biggest claim to fame sits in a squat building not far from the Leuven Institute for Beer Research. Metal banding lends its facade the glittering look of a silicon wafer etched with microcircuitry. Inside, its lower floors hum with the noise of $3bn-worth of some of the most complex equipment humanity has ever devised. The offices above house hundreds of the planet’s keenest semiconductor engineers dreaming up the future of chipmaking.

The building (pictured) is the headquarters of the Interuniversity Microelectronics Centre. imec, as it is better known, does not design chips (like America’s Intel), manufacture them (like tsmc of Taiwan) or make any of the complicated gear in its basement (like asml, a Dutch firm). Instead, it creates knowledge used by everyone in the $550bn chip business. Given chips’ centrality to the modern economy—highlighted by the havoc wrought by current shortages—and increasingly to modern geopolitics, too, that makes it one of the most essential industrial research-and-development (r&d) centres on the planet. Luc Van den hove, imec’s boss, calls it the “Switzerland of semiconductors”.

imec was founded in 1984 by a group of electronics engineers from the Catholic University of Leuven who wanted to focus on microprocessor research. In the early days it was bankrolled by the local Flemish government. Today imecmaintains its neutrality thanks to a financial model in which no single firm or state controls a big share of its budget. The largest chunk comes from the Belgian government, which chips in some 16%. The top corporate contributors provide no more than 4% each. Keeping revenue sources diverse (partners span the length and breadth of the chip industry) and finite (its standard research contracts last three to five years) gives imec the incentive to focus on ideas that help advance chipmaking as a whole rather than any firm in particular.

A case in point is the development of extreme ultraviolet lithography (euv). euvis a delicate process involving high-powered lasers, molten tin and ultra-smooth mirrors. The bus-sized machines that generate euv are today all made by asmland used by tsmc and Samsung, a South Korean chipmaker. It took 20 years of r&d to turn the idea into manufacturing reality. imec acted as a conduit in that process. That is because euv must work seamlessly with kit made by other firms. Advanced toolmakers want a way to circulate their intellectual property (ip) without the large companies gaining sway over it. The large companies, meanwhile, do not want to place all their bets on any one experimental idea that is expensive (as chipmaking processes are) and could become obsolete.

imec’s neutrality allows both sides to get around this problem. It collects all the necessary gear in one place, allowing producers to develop their technology in tandem with others. And everyone gets rights to the ip the institute generates. Mr Van den hove says that progress in the chip industry has been driven by the free exchange of knowledge, with imec acting as a “funnel” for ideas from all over the world.

This model has lured ever more contributors. Today “several hundred” are active at imec at any one time, the institute says. They range from startups to the stars of the chipmaking firmament, from asml to tsmc. Pat Gelsinger, Intel’s newish boss, is effusive in his praise for the outfit. Even as their number has grown, individual partners have also become more generous, in part to keep pace with the rising price of all the chipmaking equipment that imec must procure (even if it gets a lot of it from collaborators at reduced rates). As a result, imec’s revenues, which come from the research contracts and from prototyping and design services, doubled between 2010 and 2020, to €678m ($773m). Its annual takings are already on the order of those of giant charities such as the Ford Foundation or the American Cancer Society, and growing roughly in line with the booming chip business (see chart). 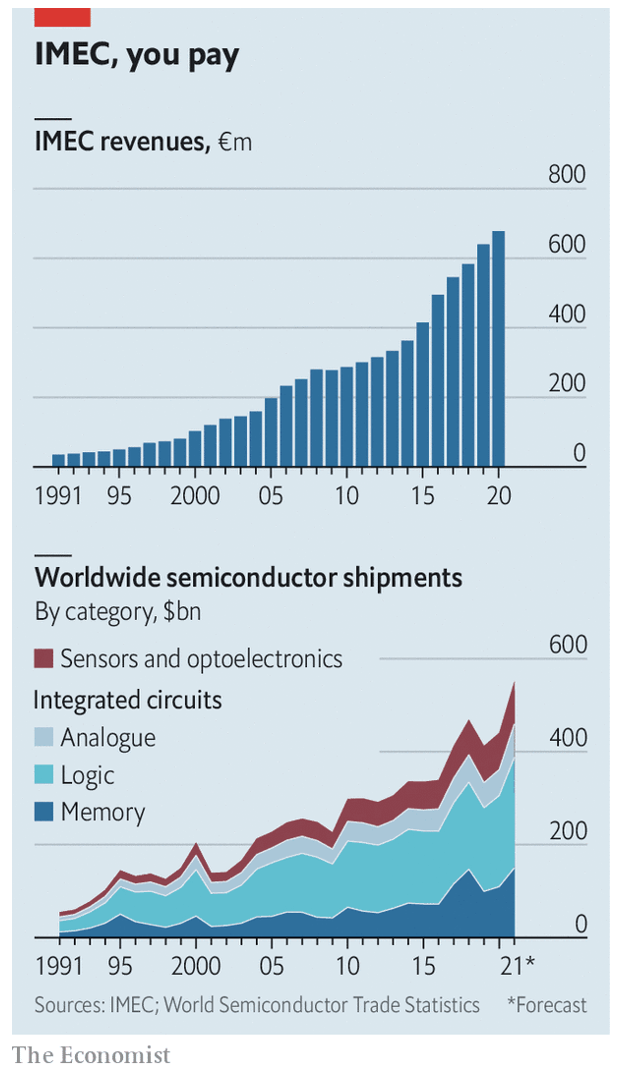 The deepening rift between America, home to some of the industry’s biggest firms, and China, which imported $378bn-worth of chips last year, threatens imec’s spirit of global comity. China’s chip industry is increasingly shielded by an overbearing Communist Party striving for self-sufficiency, and ever more ostracised by outsiders as a result of American and European export controls. All this limits the extent to which imec can work with Chinese semiconductor companies.

It is a matter of public record that imechas worked with Chinese firms in the past, including Huawei, a telecoms-gear giant with a chip division that has been hobbled by American sanctions, and smic, China’s biggest chipmaker. Chinese make up 3.5% of people working at imec, the fifth-largest group and ahead of Americans at 1.5%. imec has a unit in Shanghai. Still, no Chinese tools are visible in its basement. imec would not comment on individual partnerships but says it has “a few engagements with Chinese companies, however not on the most sensitive technologies, and always fully compliant with current European and usexport regulations and directives”. Mr Van den hove adds that imec has no “major partnerships” with up-and-coming Chinese toolmakers.

Less chipmaking know-how flowing to China and less streaming out of it means that Chinese engineers’ ideas can no longer be integrated with the global technology base of which imec is the custodian. There is little that imec can do about the growing distance between the Western and Chinese techno-spheres. So it is focusing instead on what it does best: pushing the cutting-edge of chip manufacturing.

A hulking machine made by suss MicroTec, a German firm, scans chips to create a 3d image so that multiple processors can be aligned and affixed—fiddly business at nanometre scales. Elsewhere in the building Peter Peumans, who runs imec’s health-tech portfolio, hands over a prototype developed during the pandemic that uses a custom silicon chip to cut dna-sequencing times from hours to minutes. Xavier Rottenberg is developing semiconductor-based ultrasound sensors that can be printed out using the technology to make flat-screen tvs, which may lead to scanners much larger than today’s handheld ones and able to capture the whole body at once at a higher resolution. Such work keeps imec’s neutral ideas factory awhir. Maintaining Swiss-like neutrality in chip geopolitics will be tougher.