To future-proof citizens’ ability to work, they will require new skills—but which ones? A survey of 18,000 people in 15 countries suggests those that governments may wish to prioritize.

We know that digital and AI technologies are transforming the world of work and that today’s workforce will need to learn new skills and learn to continually adapt as new occupations emerge. We also know that the COVID-19 crisis has accelerated this transformation. We are less clear, however, about the specific skills tomorrow’s workers will require.

Research by the McKinsey Global Institute has looked at the kind of jobs that will be lost, as well as those that will be created, as automation, AI, and robotics take hold. And it has inferred the type of high-level skills that will become increasingly important as a result.1 The need for manual and physical skills, as well as basic cognitive ones, will decline, but demand for technological, social and emotional, and higher cognitive skills will grow.

Governments are keen to help their citizens develop in these areas, but it is hard to devise curricula and the best learning strategies without being more precise about the skills needed. It is difficult to teach what is not well defined.

We, therefore, conducted research that we hope will help definitions take shape and could contribute to future-proof citizens’ skills for the world of work.2 The research identified a set of 56 foundational skills that will benefit all citizens and showed that higher proficiency in them is already associated with a higher likelihood of employment, higher incomes, and job satisfaction.3

Some work will, of course, be specialized. But in a labor market that is more automated, digital, and dynamic, all citizens will benefit from having a set of foundational skills that help them fulfill the following three criteria, no matter the sector in which they work or their occupation:

We used academic research and McKinsey’s experience in adult training to define what these foundational skills might be (Exhibit 1). We started from four broad skill categories—cognitive, digital, interpersonal, and self-leadership—then identified 13 separate skill groups belonging to those categories.4 Communication and mental flexibility are two skill groups that belong to the cognitive category, for example, while teamwork effectiveness belongs to the interpersonal category. 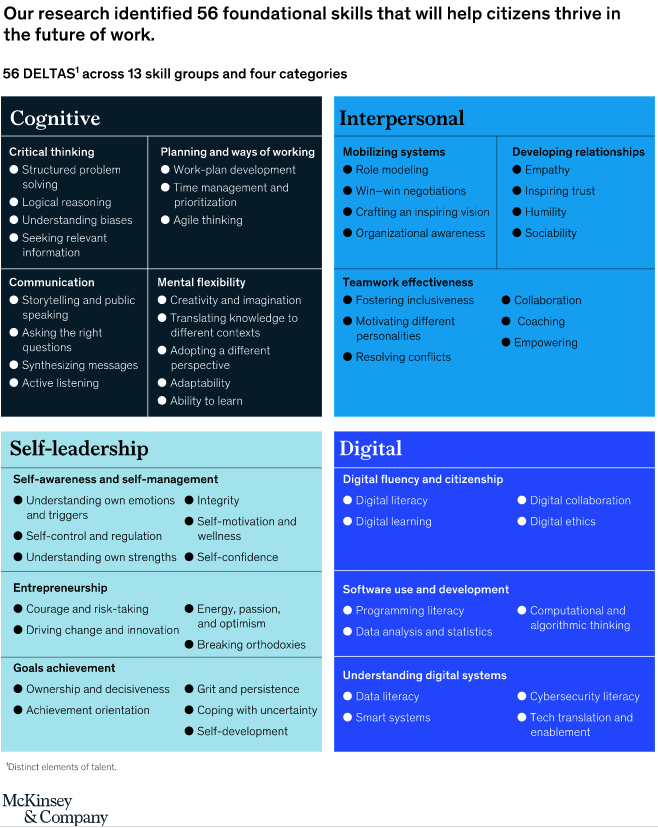 The results showed respondents’ proficiency was lowest in two skill groups in the digital category—software use and development and understanding digital systems. Proficiency in the skill groups for communication and planning and ways of working—both in the cognitive category—was also lower than average (Exhibit 2). 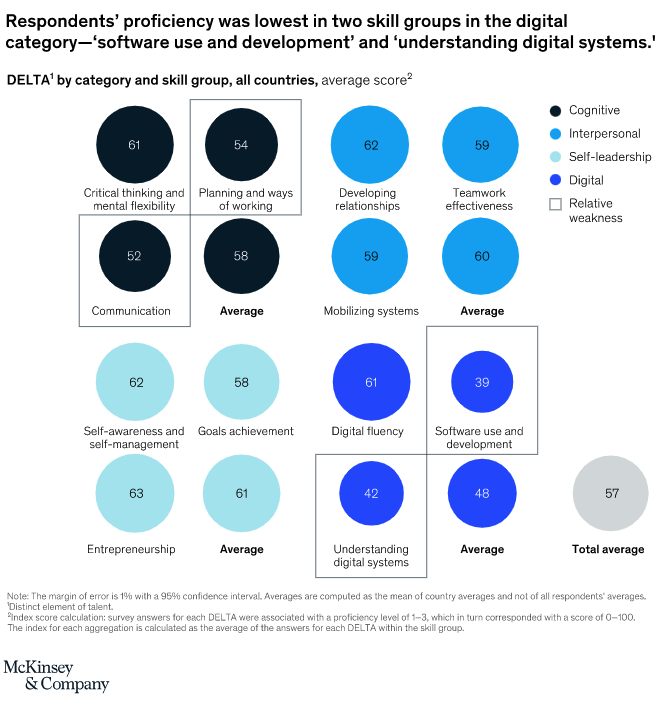 We also examined whether proficiency was linked to education. Overall, survey participants with a university degree had higher average DELTA proficiency scores than those without, suggesting—perhaps not surprisingly—that participants with higher levels of education are better prepared for changes in the workplace. However, a higher level of education is not associated with higher proficiency in all DELTAs. The association holds true for many DELTAs in the cognitive and digital categories. But for many within the self-leadership and interpersonal categories, such as “self-confidence,” “coping with uncertainty,” “courage and risk-taking,” “empathy,” “coaching,” and “resolving conflicts,” there is no such association.6 For some DELTAs, more education was associated with lower proficiency, “humility” being an example.

Exhibit 3 lists the DELTAs where proficiency has the highest and lowest correlation with the level of education. (Some have a negative coefficient.) 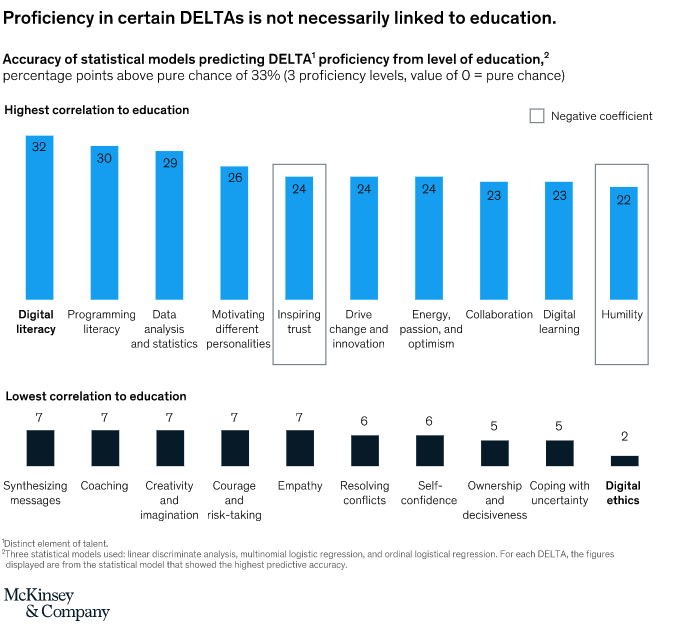 We went on to test whether proficiency in the DELTAs was already helping people in the world of work; the results showed that survey respondents with higher DELTA proficiencies were, on average, more likely to be those that were employed, with higher incomes, and higher job satisfaction. Different DELTAs were more strongly associated with these three work-related outcomes, however.

Holding all variables constant—including demographic variables and proficiency in all other elements—we found employment was most strongly associated with proficiency in several DELTAs within the self-leadership category, namely “adaptability,” “coping with uncertainty,” “synthesizing messages,” and “achievement orientation” (Exhibit 4, part 1).7

High incomes were most strongly associated with proficiency in the four skill groups where overall proficiency levels were lowest among respondents—namely understanding digital systems, software use and development, planning and ways of working, and communication (the first two fall within the digital category and the latter two within the cognitive category).8

That said, the four DELTAs most strongly associated with high incomes were “work-plan development” and “asking the right questions,” both in the cognitive category; “self-confidence,” a self-leadership DELTA; and “organizational awareness,” an interpersonal DELTA (Exhibit 4, part 2). 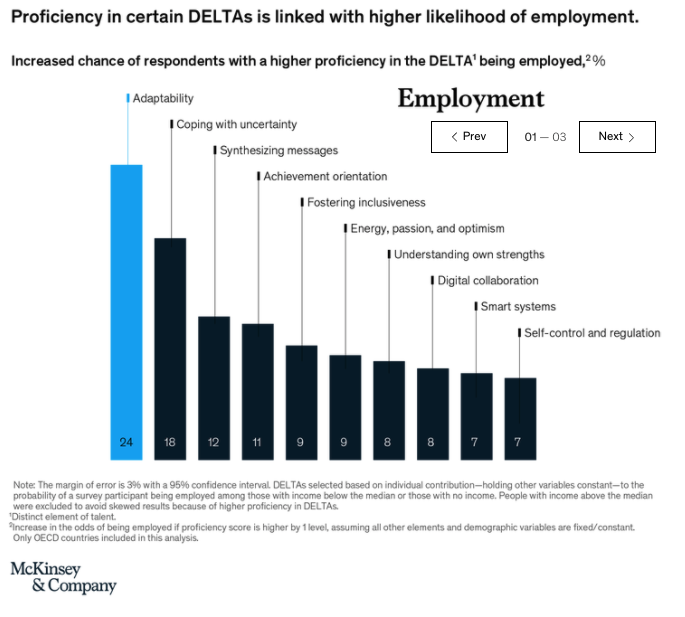 Job satisfaction is also associated with certain DELTAs, especially those in the self-leadership category. Holding all variables, including income, constant, “self-motivation and wellness,” “coping with uncertainty,” and “self-confidence,” had the highest impact on respondents’ job satisfaction (Exhibit 4, part 3).11

Notably, proficiency in two self-leadership DELTAs—“self-confidence” and “coping with uncertainty”—ranked among the top three most predictive DELTAs for two out of the three outcomes (Exhibit 5). 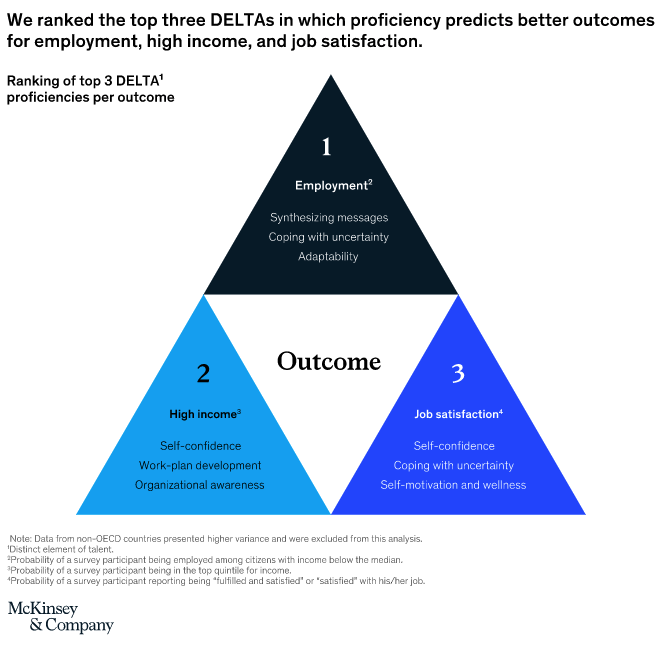 How DELTAs could help shape education and adult training

Our findings help define the particular skills citizens are likely to require in the future world of work and suggest how proficiency in them can influence work-related outcomes, namely employment, income, and job satisfaction. This, in turn, suggests three actions governments may wish to take.

Our research suggests governments could consider reviewing and updating curricula to focus more strongly on the DELTAs. Given the weak correlation between proficiency in self-leadership and interpersonal DELTAs and higher levels of education, a strong curricula focus on these soft skills may be appropriate.

Governments could also consider leading further research. Many governments and academics have started to define the taxonomies of the skills citizens will require, but few have done so at the level described here. Moreover, few, if any, have undertaken the considerable amount of research required to identify how best to develop and assess such skills. For instance, for each DELTA within the curriculum, research would be required to define progression and proficiency levels achievable at different ages and to design and test developmental strategies and assessment models. The solutions for different DELTAs are likely to differ widely. For example, the solutions to develop and assess “self-awareness and self-management” would differ from those required for “work-plan development or “data analysis.”

In addition, governments could consider setting up institutions for research and innovation in education to fund the research, facilitate researchers’ access to schools to test innovative solutions, and establish which methods work for which DELTAs. They could also make the emerging data and insights available to researchers and educators in the private sector.

The majority of respondents we surveyed—like the majority of people in society at large—were no longer in national education systems. Raising proficiency in the DELTAs would therefore require continuous adult training. The fact that proficiency in digital DELTAs—shown to improve the chances of achieving higher incomes—was lower among older survey respondents who had left the national educational system illustrates this point.

The curricula of adult-training courses may also have to change. For example, our research has shown that self-leadership DELTAs may be particularly important for employment outcomes, yet these are not commonly covered by adult-training programs. For example, in an online scan of adult-training programs, we found that courses or modules to develop DELTAs within the skill groups of goal achievement or self-awareness and self-management were 20 times less common than those to develop communication DELTAs. That could be an urgent gap to fill to adequately respond to the wave of unemployment caused by the COVID-19 pandemic.

Specific actions that might encourage relevant adult learning include the following:

Most children around the world have access to primary and secondary schooling, but not all of it is of high quality, and early education for the very young—the best age at which to develop certain mindsets and attitudes—is unaffordable for most people in most countries. In addition, very few countries have worked out a system to provide affordable access to quality adult training.

Hence, just as the Industrial Revolution in the 19th century drove an expansion of access to education, today’s technological revolution should drive further expansion to ensure universal, high-quality, affordable access to education from early childhood to retirement and to ensure that curricula include the DELTAs that will future-proof citizens’ skills in the world of work.