When people talk about tech immigration, they’re often thinking of the major tech hubs in Silicon Valley and New York City, and the companies that apply for hundreds (if not thousands) of visas per year. However, some new data suggests that the latest growth in tech immigration is centered in smaller cities and up-and-coming tech hubs.

Envoy Global and New American Economy recently issued a sweeping report on the COVID-19 pandemic’s impact on the U.S. economy and specialized immigration. Its conclusions should seem pretty straightforward to anyone who regularly monitors government data around immigration: “Data from Labor Certification Applications (LCAs) for foreign skilled workers shows that employers of computer-related or professional service workers continued to seek permission to hire foreign workers through the H-1B visa program… Their motivation to do so even during the worst of the pandemic is evidenced by unemployment data showing that the labor market at the top end of the skill spectrum remains extremely tight.”

But not all regions of the country are created equal, as you can see from the following chart that compares LCA activity between fiscal years 2019 and 2020. For this data, the report’s writers relied on U.S. Department of Labor (DOL) data on the number of Labor Condition Applications (LCAs) filed for H-1B specialty workers”: 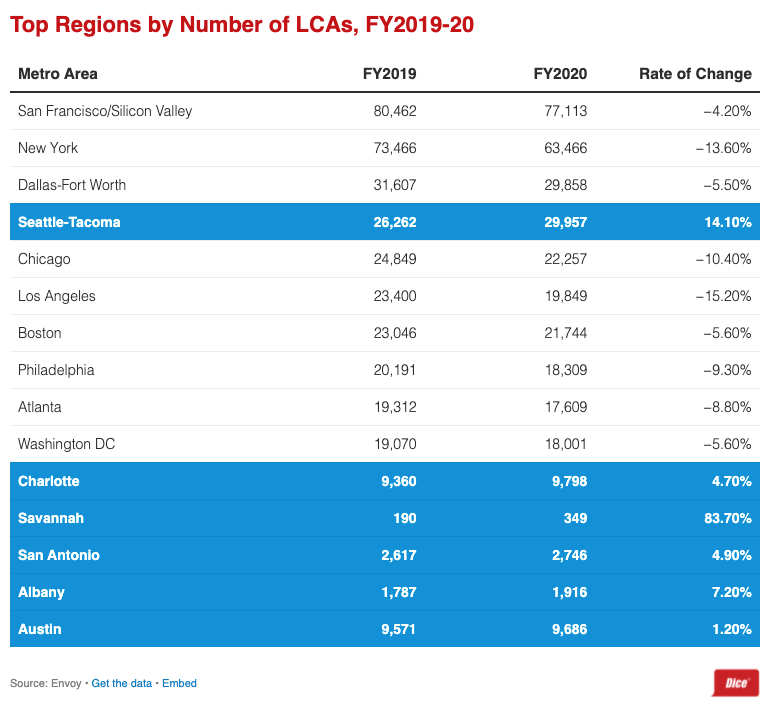 In major tech hubs such as Silicon Valley, New York City, and Washington, DC, the rate of LCAs actually declined, while it picked up noticeably in just one major tech hub (Seattle) and several cities with smaller but relatively significant tech scenes (such as Charlotte and Austin).

Is this a sign that smaller tech hubs will take over an ever-larger portion of tech immigration? It’s hard to tell. For starters, the major tech hubs such as Silicon Valley still utilize an overwhelming portion of visas, by gross numbers; it will take quite some time for the smaller cities to catch up on that front. Second, the companies that utilize the most visas still do most of their business (and have their biggest offices) in these larger cities, and such trends can take years (and often decades) to subvert.

It’s also worth mentioning that the mature tech hubs tend to pay visa-holders more than other cities, as you can see from this H-1B chart generated via DOL data: 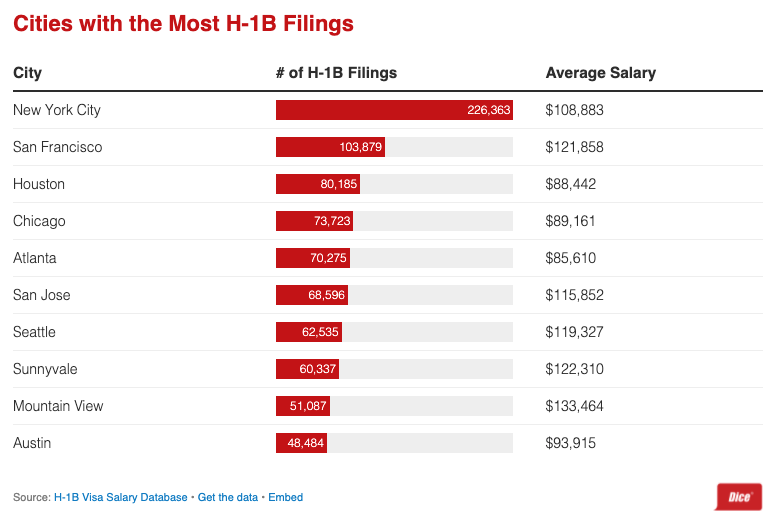 Nonetheless, it’s clear that up-and-coming tech hubs such as Austin utilize a large number of visas. The big question is whether they’ll use even more as they expand their local tech scenes, or if future policies will curtail that growth.